You are here: Home / Affiliate Marketing / Affiliate Summit East: Why Am I Speaking Again

I know I said I would never do public speaking again. I made it well aware that I was retiring from public speaking after my Affiliate Summit West 2012 session. Well a topic has been bothering me for a few months and I have to flush it out. While I could do an hour (or three) on the topic I decided to do a roundtable instead. I felt it was the best way to be able to field more questions by more people.

My topic is about publishing blog posts. Every day I get someone who tells me they have no time to blog. Every time I hear it I want to scream! In case you didn't know 2013 was one hell of a year for us.

In October 2012 Hurricane Sandy decided she was going to put 6 to 8 feet of water in our single story home. Trying to get back on our feet from Hurricane Sandy was no easy feat and it still isn't over actually. What most people don't know is while there were nights I didn't have walls or a floor or even heat I was still publishing blog posts. In a way I think it was what kept me sane at times. 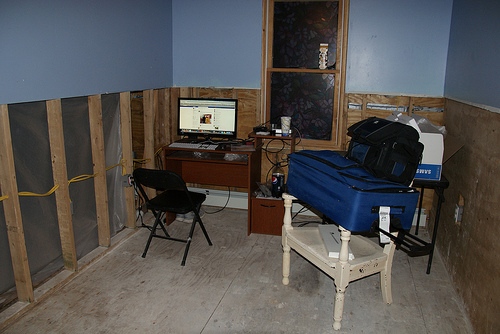 One site that I started a few weeks before the storm hit decided it was going to take off and become a major site for me. Just what I needed since we had no electric, clothes, food or good shelter for that matter. In the days that followed I had Debbie's daughter Liz publish the blog post from Arizona until I could find a computer that worked.

The first few days after the storm for me was like the movie “Groundhog Day” I don't remember much which is a good thing. It was the same thing over and over. Wake up under a cold blanket as soon as the sun rises, throw away whatever we owned, find food, and go back to sleep under the same cold blanket.

Anyway while Debbie and our cats went out to Arizona near Liz I stayed back and destroyed the house some more before building it back. My schedule consisted of building the house by day, publish blog post at night. It was exhausting! The picture was taken after I returned from Affiliate Summit West 2013. The milk was in the window because there was no fridge yet. It was the best I could do to keep it cold.

In 2013 there were over 15,000 blog post made either at the house or when I went to Arizona to take breaks from breathing in mold. The point is if I found time to publish 15,000 blog post and build a house you can find time to put blog post on your site. I will be showing the methods that I used and a few new ones that I have discovered.

Looking forward to sharing some of the things that I did last year and continue to do today.