You are here: Home / Building Websites / Is Your Affiliate Program Hurting Your Search Rankings

Today's post is post number 1 out of the next 30 days I plan on posting once a day. This post was inspired by a conversation Geno Prussakov and I had at Affiliate Summit. 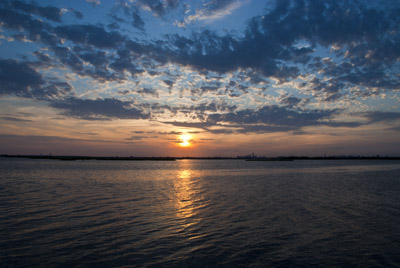 A few weeks ago we we talking to a prospective client about running his affiliate program. Casually during the conversation he mentioned if it is possible that his in-house affiliate program was causing him to have a Google Penguin penalty in the Google search engine. At first I was taken back by the question and then he told me that he had a custom built tracking solution for affiliates.

My next thought was if he was using his main site as the URL for all the affiliate links or not. The answer to that was a yes, an answer I didn't want to hear. It had been a while since I had managed a program that had this and it was very common if you had an affiliate program for a long time to be on a tracking solution like this. Tracking solutions were much more common than they are now since most affiliate programs use an affiliate network to do this. I knew at this point he was probably penalized and a storm was brewing just like in the sunset picture on the upper left.

We Will Get More Backlinks Too!

The problem with this tracking and having the affiliates use the same URL as your main site lies in the backlinks that appear to be coming in as a cause of your affiliate program. Google takes a look at all these sites linking to you and sees some weird stuff. If you have not enforced your affiliate program well you have links coming from all sorts of places like blogspots and pages that haven't been updated in years.

The anchor text is probably all the same even though the links are different because of the parameter at the end of the URL. Google doesn't care, it still sees the site linking out to garbage and placed on sites that are not quality at all. If the site is based off a keyword it could be seen as a match for keyword spamming because of the company keyword name in the anchor text.

In many cases it is one link on a site that has 100's of affiliate links. It could very well look like you are buying links on websites that are made just for placing links. Either way your site is being linked to by some bad neighborhoods. Google says they don't penalize sites for people linking to you but I have seen that to be not the case at all. Read this post on Search Engine Journal about backlink profiles in Google and their use of the word “Almost”.

Let's just say you have 5000 affiliates that have links up on 5 or 10 sites like this. Some of these sites are dormant since the search engine rankings dropped and haven't been updated in years. They are all penalized because they have a lot of affiliate links themselves and probably no backlinks. All of a sudden you are on 10,000 -15,000 pages and probably with the same anchor text.