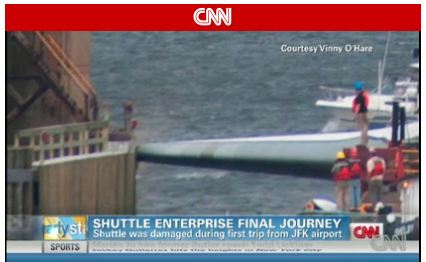 Today I want to talk about luck or should I say planning.

A few weeks ago at Affiliate Summit my friend Sean Dolan from Pushfire said to me “Hey Vinny, you always seem to be in cool places taking pictures.” As he said it I thought to myself  “I am getting some good stuff lately. What am I doing different?”

After thinking about it I concluded that good planning has been the secret to my success of late. When I find out something is going on in NYC I usually plan what I am going to do. Usually I wouldn't find out about things until after they happen but lately I have been finding things out well in advance.

Lets take my recent journey with the Space Shuttle pictures. I saw on Google news that it was coming into NYC and landing at JFK airport. I Googled for some information on it and ended up on the NYCaviation forum. These guys were on top of it and had places they were going to meet to get the best angles. They were very sharing with their information even though I was new to their forum.

I learned that I could download the JFK control tower on to my android phone and know exactly when it was coming in and what runway. Actually what runway it was going to land was obvious since they would use the longest runway if possible.

The cool thing about the first space shuttle adventure (I have two) was that the place I picked to get the shots was a place only 3 other people knew about. The 747 and space shuttle passed over us on the initial flyby so close that I probably could have thrown a rock and come close to hitting it. (Not that I ever would of course)

The next adventure with the space shuttle happened a few weeks later when they moved it from JFK airport to the Intrepid Space Museum on a barge. I knew the place I wanted to be was right in the middle of the bridge that it was going under. Early reports were they were going to move it at 8am so I was on the bridge at 7am.

Well one of my neighbors who tracks the tug boats on his phone told me about this cool app that I downloaded that shows me all the boats in the harbor and when they are moving. I downloaded the app and went and got some breakfast. A few hours later I saw it move and set up in my spot and got the shots and they ended up on CNN.

Using the same scanner and knowing what runways are what at JFK, I was also able to get pictures of Air Force One coming in to land a few weeks ago. Once again the guys on the aviation forum helped out but I went to another location just a few blocks from my house and took some cool pictures. It isn't every day that you get to see Air Force One in action. As I stood on the beach getting ready to take the shot I listened to the airport control tower on my phone when it cleared the airspace around JFK.

Now I pretty much know all the cool stuff that happens in NYC because I follow the local people on Twitter and they let me know when something is happening that they may think I would like pictures of.

A few weeks ago I noticed a big storm coming up the coast. I said to myself I bet there are some big waves in Rockaway and people will be surfing. Sure enough they were surfing and this is the picture from that shot. Once again it was planned a day in advance.

A few weeks later I was checking the weather and they was talking about a big storm coming in around 4pm the next day. I said to myself “Red sky at dawn sailors be warned” so I thought if I went to the beach in the morning of the storm and saw the sunrise it would make for a nice picture. I got on the subway at 430 am and went in the opposite direction of the people going to work and ended up with some amazing shots of the sunrise.

I also have a sunrise – sunset calender set up in Google calender to let me know when the sun comes up and down. Knowing when the sun goes down is a major factor in getting pictures like this.

I guess you can chalk in up to being prepared. Years ago I was at a show and they had a sign that said Carmen Electra will be posing for pics and autographs. The sign said it was happening at 3pm or something and when I saw the sign I only had 10 minutes and I had no camera with me. I quickly went to the newspaper stand in the Jacob Javits center and bought an automatic film camera.

The Javits center has the worst shooting conditions since it is all skylights. Well here is the only picture that I have of me and Carmen Electra. Just sad, Now I am always prepared for taking pictures and I have a plan. Yes taking a good picture of Carmen Electra is on my bucket list. I didn't take this picture though so I am not sure if it counts on my overall record. I handed the camera to the guy behind me in line. Why? A lack of planning.