You are here: Home / Social Media / Twitter Auto Posting – Is It Worth It?

Yesterday I did a little Twitter experiment. You should know that I am not a fan of auto posting to a twitter account. That said I figure I try something to see if you could post tweets for 24 hours without anyone caring or unfollowed.

I use Hootsuite (paid account) they have this cool bulk upload feature which allows you to upload a csv file with up to 50 tweets at a time. You can set the times and schedule the tweets out as long as they are 5 minutes apart from each other. I decided to use this and interact with my readers for almost 24 hours straight. I did this using my NASCAR twitter account since it has the most scattered fans throughout the country. @awesomeracefans

I started the experiment at midnight and had the tweets scheduled for every half hour or so – a total of 48 tweets. A few of the tweets were generic things like what is your favorite NASCAR track etc, Some tweets were shout outs to our Facebook fan page encouraging “Likes” and also to our newsletter sign up page. 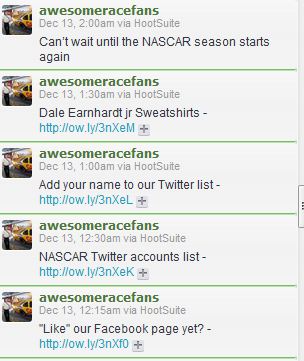 The tweets started at midnight and since I was still awake until around 2:30am I could actually interact with people on the west coast that were retweeting the messages or responding to the questions. I figured the middle of the night would be dead so I wasn't expecting any interaction. These are when I had the account send tweets like “Cant wait until Nascar starts again” and some tweets out to our NASCAR shopping section. Basic stuff where I didn't have to do a direct response and wouldn't expect any interaction.

When the sun started to come out on the east coast I put some of my tweets into a question form. This way when I woke up I would have some tweets to interact with. Asking people what their favorite NASCAR movie is and what is their home track etc. Just some basic questions that any NASCAR fan would have an opinion on. Nothing too controversial just some casual questions which I expected some responses too. 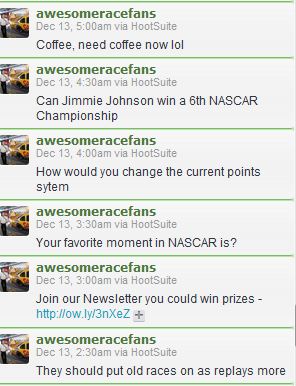 When I got up I started to reply to some of the responses left and picked up right along as if I never slept. Over the course of the night I had a few people sign up for the newsletter, a few likes on Facebook and a few responses.

I answered the responses and kept on tweeting every half hour and had over 40 interactions with people. All positive and I learned some things about my followers.

Was it worth it, I am not sure yet. It did take me 15 to 20 minutes to set up, another 15 to think of questions. The jury is still out for me, might try it again on another account and see what results it brings.