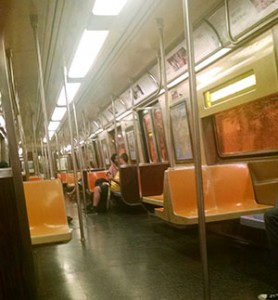 Before I get on with the post I want you to see where I am writing this post right now. I am on a NYC subway train traveling through Brooklyn. This weekend I had a roundtable at the Affiliate Summit conference and it was all about making blog post. The post below was typed on my phone and saved in Evernote. If you have an hour commute make the most of that time by writing a blog post or at least starting one. Now on to the post.

Meeting people
Affiliates normally work by themselves in their home office or whatever part of the world they call their writing home.

Even though it happens from time to time it is always kind of strange when you are at a conference and someone you don't know comes up to you like they know you because they read your blog.

Today that happened to me at Affiliate Summit. As I was browsing the show floor a nice guy looked at my badge and zoomed across the aisle and says my name and puts his hand out to shake mine. At first you think you know them and you try to place the face in your memory bank but you never do. The guy explains that he reads my site, is on my newsletter list and bought my book.

I stood there flattered and excited. I asked him what he liked about the site and what he wanted to see more of. We probably talked about a 1/2 hour.  Then he told me what his biggest problem was and let's just say my solution made his trip to Affiliate Summit totally worth it.

I could see it in his eyes as he dropped his stuff on the floor as if he was in shock at how simple it was.

I told him if he had sent me an email with the problem I could of answered him years ago.