We just got back from a week of Affiliate Summit Central 2012 and Shareasale's Think Tank.  They were both held in Austin, Texas, and it was a great place to hold both conferences. We flew out of New York City on Monday and returned on Saturday, this gave us the day before and the day after to get some R&R. Although I don't know what R&R really is.

What was different than usual Affiliate Summits, is that this event only lasted two days, and they did not have any booths. They had the usual meet market tables, which has been a big hit at the other Affiliate Summits. What I liked about this meet market, is that they had a bunch of tables in the middle of the room where people could sit down and talk. I understand it's all about meeting merchants and services at the meet market, and I think having tables in the middle made it easier.

It seemed to take away from the large crowds that meet market usually gets. It was just so much more laid back type of event.  I made my way around the room on different occasions and met with a lot of people. They also used these tables to serve breakfast and lunch. In a way, I think it was a good thing for the vendors at the meet market. It brought people into the room, over and over again.  I know for me the first day, I only visited half of the merchants, and on the second day I visited the rest of them. I was able to talk with every meet market table. With the larger meet market that is almost impossible to do in one day.

Shawn, Missy and the rest of the Affiliate Summit group really know how to put an event together. I enjoyed all the speakers, and I took a lot of notes. I am not a person that takes a lot of notes usually, but since I am adapting to using Evernote.  I find it easier to take notes since I can also sync it with my smartphone. I wasn't sure how this was going to work out since there wasn't a blogger lounge. I usually set up shop in there after each session and write down some takeaways. This was also the first conference where I use my new tablet device.

I forgot what show it was that I attended last and someone asked me why I still use my laptop at shows.  After using a tablet for the show and keeping my laptop in the room I could see their point. I think I may even go down to just using my smartphone and EverNote from now on.

I really enjoyed the session, where they spoke about speeding up WordPress. I took a whole full page of notes, which is very unusual for me. The speakers were David Vogelpohl, CEO, Marketing Clique (Twitter @davidvmc) – Jason Cohen, Founder, WP Engine (Twitter @asmartbear) and Chris Pearson, Owner, DIYthemes.com (Twitter @pearsonified).

They gave plenty of tips and highlighted some new tools that I have never heard of. I am sure I will be incorporating some of these into another blog post. I have been looking for alternative to picnik since Google took them over and may have found it using Smushit.

The food at this conference was off the hook. I was kind of looking forward to it since Austin is the BBQ capital of the world.  I was wondering who was going to win out in the food war between Missy and Shawn.  I know Missy is basically a vegetarian and Shawn likes his beef.  I was kind of hoping that the food would be along Shawn's line of thinking, and it was!  Thinking about it now, I now know how I gained 5 pounds during the week.

Leaving Affiliate Summit and heading to Shareasale's Think Tank was an easy process. Brian and the crew at Shareasale left early for the golf game and they had shuttles running for the other guest that didn't play golf. I didn't play golf since I know I suck at it but after watching the video of the others playing I just may play if I am invited again. For some reason I always thought that the golf part was for serious players.

After a short drive with lots of scenery and some good conversation we pulled up to the beautiful Lakeway Resort and Spa. After lugging the bags to the room it was time to check in to the event and pick up our goodie bags. The crew at Shareasale couldn't have been better as they showed us where we had to set up for the OPM/Agency event that was later that evening. People were coming and going and we met up with some old friends as well as some new clients which is always fun. 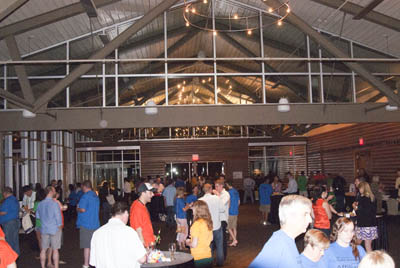 Before the event Debbie and I grabbed a quick lunch/snack at the pool which was pretty good. Then we had to hustle up and get ready for the party. This of course included the cameras as we could see there was going to be an awesome sunset.

The event was pretty good and I had some good conversations out on the balcony that was right outside our table. Shareasale gave away a trip to Hawaii if you visited each table and received a stamp on a card. The grand prize was won by Eric Souza! Congrats to him and his wife.

The food at the resort was very very good. No need to go into details as all the meals were really great! I couldn't believe when I got home and the scale said I gained 5 pounds. It probably would have been 10 pounds if I hadn't walked all over the place during the week.

The next morning was filled with sessions aimed at everyone and some detailed sessions aimed at either affiliates, merchants or OPM's. We learned about a new affiliate recruitment tool that will be available in the future. Although at first I had my doubts about it after hearing all the details about how it works I determined that this is a great tool for both affiliates and merchants.

Then it was off to the merchant private meetings where we had 6 client tables. These were set up so merchants could meet with affiliates who were interested in promoting them. It was a good face to face meeting time where they could both learn about each other and maybe set up some methods of promotion.

After these sessions it was time for a quick lunch and then head out to Lake Travis for some fun on the water. I wasn't going to go as I felt like just hanging around the resort. Debbie talked me into going and we grabbed the cameras and ended up on a pontoon boat that took us to the big boats. After snapping a few hundred pictures along the way we transferred to one of the big boats. We settled into the lower half of the boat were it was cooler and proceeded to talk about ppc and affiliate marketing in general. Lots of others were having a ball in the water and there was jet ski's and all sorts of water fun going on. Everyone had a great time and got  plenty of sun.

We arrived back just in time to get a quick break before heading over to the Affiliate Summit sponsored Pool party. During this event I met up with a few affiliates that recognized my voice from the podcast. Between both events I must of had about 15 people come up and say they listen to the podcast. That always makes me feel good! When you are recording them you don't focus on people listening. They had a great band playing and when the band took a break they showed a video which had some really funny moments.

After the party we settled into the restaurant/bar where Brian played piano and affiliates sang along for about 3 hours. This was the most fun of Think Tank as everyone had a great time. James Martell, Don Campbell and I settled into a corner table and talked about affiliate marketing the whole time. We covered so many topics in that time I wish we had recorded it. After the bar closed we all settled in the outside of the bar where they had chairs and tables and talked for another hour.

Next morning came quickly and breakfast was great and then it was off to more merchant meetings. When we broke for lunch Don Campbell and I showed him some of my social media tips and tricks. I love sharing what I have learned if it can help people. Then it was off to the “Things we have to fix” session where Brian takes questions and has a healthy discussion on things that could be done better.

With that Think Tank came to an end. We stayed another night since the flights on Friday just were not at the right time. After hanging out at the pool with James and Arlene Martell where James and I once again discussed internet marketing while sitting in the shade. We then went to dinner and settled into our rooms for a night of relaxation. This of course means approving affiliates that I had met over the weekend.