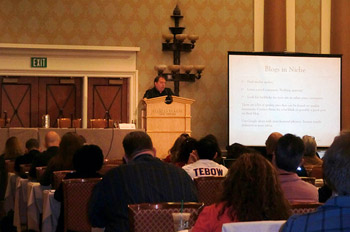 Affiliate Summit West 2012 was a very different conference for me this year as I chose to speak for a change. I have been on a few panels before but this time I had a whole session to myself where I could put more details into a bunch of topics. My session was titled “25 ways to improve your website” but I over delivered and made it 28 and if you take that I put 3 points in each section my session gave about 84 things to look at.

I have to thank Shawn and Missy for letting me speak at Affiliate Summit. The session came close to being cancelled as I could barely talk between a cough I picked up and just not feeling well had me worried. The day before my session I could not talk at all. The last thing I wanted to do was have to cancel a session after finally agreeing to do one.

We got to Vegas early for a much needed break before the show. When Friday came about friends started to wander into town and we went over to the Ceasers Palace hotel to say hello to them. We settled into the Galleria bar in the lobby and as soon as we got there the smoke from people smoking cigarettes hit me like a wall. The ceilings in the place were so low there was no place for the smoke to go. Add this in with trying to talk over all the noises from the slot machines caused me to wake up during the night not able to breathe. It felt like a tennis ball was caught in my throat. Not exactly the way to start off a show, especially one you have to speak at.

After waking up and what seemed like a million cough drops and water I was able to get out a squeak of a voice.  We headed over to registration and for a meeting. All day Saturday was just filled with people asking me to repeat myself. After a while I just shut it down and went back to the hotel where I could rest my voice. This seemed to be a wise choice as my voice came back in time for my Sunday session.

My session went well except I forgot to leave time for questions and answers but I did them after as people came up to me after with a bunch. I am the first to admit that public speaking is not my area of expertise and I felt like I was rushing at one point. After asking a few friends in the audience, they said I wasn't so I feel good about that. I admit around the 3rd slide where I had to talk about myself and experience I did get a little nervous. It is hard to talk about yourself in front of a bunch of strangers, especially when you don't do it all the time.

I did have some mistakes in the session saying that Facebook had 70 million users when in fact it is 700 million. I am going to have to look back and see how I made that mistake.  Surprised I didn't notice it in the power point and odds are I probably said it since I was looking at my screen. If that was my only blunder so be it. I did have a few slides that I was going to take out to make it 25 but decided to leave them in. Meta keywords and keyword density were two candidates since no one talks much about them. Did they deserve their own slides? Maybe not but I felt it was important enough to talk about them and since there was newbies in the room it was a good decision.

After it was over I didn't give much thought about reactions and was pleasantly surprised at how my session was viewed. Shannon from Marketing Elf and Dave from Fat Cow Business gave me nice reviews. The biggest surprise came from people just walking up to me and even going out of their way to let me know they enjoyed the session. Most were surprised when I told them it was a one time deal and I have no plans to ever talk again in public.

I handed out a worksheet that went along with the session but I didn't print enough as people were taking 3 or 4 each so they could use it on each one of their sites. That was very well received, I wonder why more speakers don't give worksheets out as audience members should have a takeaway from your session.

So I learned you have to take good care of your voice when you are speaking in public. I totally took that for granted and have more respect for people like Peter Shankman and Chris Brogan who speak all the time.